I’ve secretly always wanted to be a garbage man because they only work on Wednesday.

Trash day reminds me of an ice cream truck. I know that sounds strange, but hear me out. Do you remember the sheer panic that engulfed you when you were a child and heard the music of the ice cream truck?

It’s exactly the same for me if I somehow forgot to put the trash out and hear the sound of the truck coming. Suddenly, I look like a fool running out and trying to push the can straight and fast enough to make it in time. 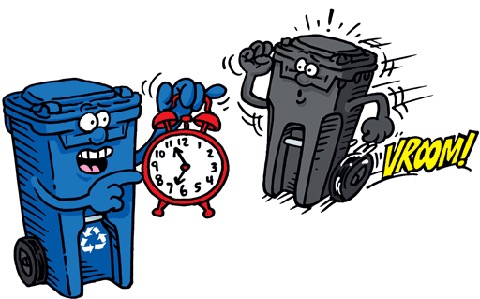 One time, the can was completely full and while I was running with it, the garbage guy patiently waited for me to get the can to the curb. That is before I fell, knocking over the can, while landing on mine and spilling the contents of the garbage all over the driveway.

The driver was laughing as he pulled away while I sat like an idiot in the middle of the trash. To make matters worse, one of my neighbors witnessed the whole thing. I swallowed my pride and a banana peel and picked up all of the trash. It wasn’t pretty.

Every other Wednesday they also pick up the recycling can too. The problem is that the truck that picks up that stuff comes much earlier than the regular truck. So when I am awakened by the first truck, I instantly panic, even if I put it out the night before. It’s just a PTSD reflex which I blame directly on the ice cream truck when I was young.

Check out my books on Amazon.com!

One thought on “That’s Rubbish!!”