A man appeared before St. Peter at the Pearly Gates.”Have you ever done anything of particular merit?” St. Peter asked. “Well, I can think of one thing. Once, on a trip to South Dakota, I saw a gang of bikers threatening a young woman. So, I punched the biggest biker in the face, and said, “Now, back off, or I’ll do it again.” St. Peter asked, “When did this happen?” The guy said, “Just a couple of minutes ago.”

Let’s see, two biker gangs shooting each other. Unless an innocent person is injured or killed, I’m having trouble finding a down side.

I learned a long time ago that if you have to jump in and stop a fight, you have to to act like the craziest man that ever lived. It will even freak out gang members. I know, because I’ve done it. One night in California, Heather and I pulled into a gas station.

Our car was leaking oil, so in addition to gas, I was buying some oil. There were a couple of guys in there with no shirts, and gang tattoos all over them. There was a lot of tension in the air, and you didn’t dare make eye contact with anyone. It doesn’t take much to set these guys off. 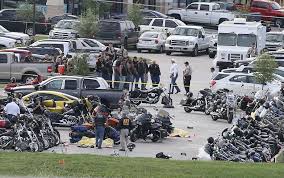 The first guy bought what he came in to get, but the second guy grabbed a bag of chips and told the clerk he would pay him back the following day. If I were the clerk, I would have written down, “Missing one bag of chips”. Not this idiot.

He went after the guys. I ran outside because I knew this guy didn’t stand a chance and I also didn’t know if they had guns. So I went out and heard this horrible screaming coming from around the corner. As I got there, one of the guys was kicking the clerk hard, in face, abdomen, etc.

The crazy guy kicked in and I started charging the aggressor, screaming like a mad man. He let loose of the guy, got in the car with the other guy, and they burned rubber getting out of there. I tried to help the clerk up, but he just walked right passed me without even saying thanks. Very rude, I thought.

You just can’t show fear. Guys like that look for it. Once they see it, you’re toast. But if you are the aggressor, they don’t know how to handle that, especially when you’re not a member of their gang.

I’m not suggesting that you try this at all. That’s my legal disclaimer. All I know is that it works for me. I did it to another hard core biker once, something I’ve recently written about and it worked again that time. They think you are very brave or very, very stupid. Kind of like in the movie, “Wild Hogs”.