Yesterday, I went to get a shiatsu massage, but I accidentally asked for a shitzu massage. The guy punched me in the face for a half hour. Mission accomplished.

Dogs are wonderful. They are loyal, loving, playful (most of the time) and are just fun to be around. We have two dogs. Maggie, named after my wife’s grandmother, and not because there was any resemblance, she just needed a puppy to help her get through her loss. Maggie is a toy schnauzer and is so much fun! She loves to play, eat and sleep. 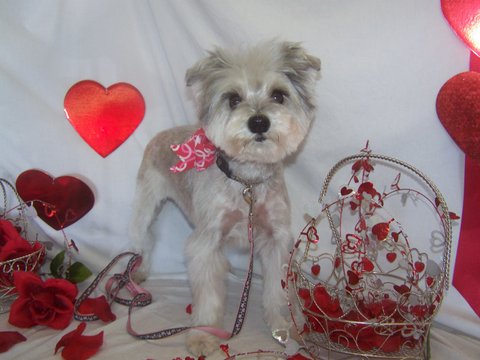 We have another toy schnauzer that we rescued from a breeder who couldn’t care less about the dogs used for breeding. So, we brought eight year old Sammy home. She never learned how to play and she’s exhausted from being a part of the puppy mill. She’s very sweet and loves to cuddle.

I know she was abused because for the first couple of months she would cower or hide when I came anywhere near her. (insert joke here) Finally, when she realized that I was never going to hit her, she warmed up to me.

We lost our mini schnauzer to cancer three years ago. In addition to the qualities I mentioned in the other puppies, he was very smart and very athletic. We had a huge backyard and I could throw a tennis ball a long way and he would catch it in mid air on the first bounce. He also knew many tricks and was very quick at learning new things. His name was Mulder, yes, after the character in The X-Files. We used to live in the mountains here in Utah, and he loved it up there! No one chained their dogs there, they would run free, explore everything possible. They would walk into any house that had a door open, get a treat and go on their way.

We never locked our doors, which were French doors, so all you had to do was pull down on the handle to open the doors. There were two older, happy yellow labs that would open the doors to come in to visit and get a treat. That was fun.

It was a perfect place for a dog to live. Sure, they had to watch out for the moose that hung out there in the winter, but that was the only danger. Even the cars were driven slowly to protect all of the wildlife up there. In the six years we lived there, not one dog was hit by a car.

One winter, Mulder didn’t come home in the evening, which was unusual. It was also snowing like crazy and very cold outside. We obviously became concerned but decided to wait for a while to see if he returned. He didn’t.

At one am, we decided to go look for him. So, here we were, trudging in knee deep snow, looking for him. It’s important to note that this was the time period where Mulder on The X-Files was missing. We were walking through a snow covered field, with flashlights, hollering, “Mulder!” One of our neighbors came out on his deck and yelled, “It’s not real. It’s just a TV show!”

We went back home and Mulder showed up about a half hour later, warm, safe and sound. He had obviously been at a neighbors house, who had a doggy door. We’re contemplating getting another schnauzer, but we can’t spend a lot of money because we’re saving for a trip to Seattle, Georgia and Mississippi to see our kids and grandkids. They obviously come first. My wife wants to name this one Gibbs. I know! Another TV character.

Check out my books at Amazon.com or click here!